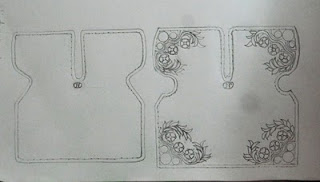 Above is the lower skirt pattern for Nichols' saddle set.  The pattern on the left is the usual pattern and the one on the right is (obviously) the enlarged one.  The last time I used a saddle pattern was for my roping set for Kay C.   The Peter Stone IDeal Stock Horse Mold (or ISH) has a back that is much smaller than Sarah Rose's reiner that I'm making the saddle set for.  Actually the ISH is all around smaller than the reiner.

I'm finding myself looking forward to making this saddle now and the inspiration is alive and well.  I'm using a RDLC saddle tree obtained from Alison Benuish of The World of Model Horse Collecting.

More photos when I get farther along! 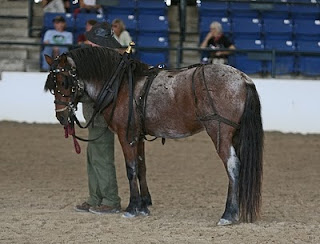 Thank you to everyone that Entered the arabian show halter lottery.  I'm truly humbled by the response and the people that continue to support my work.. I'll try to do another one in the coming months and maybe even offer a western show halter with braiding if I get the time! (above photo is from the Festival of Rare Equines at the kentucky horse park a few years ago.  His name is Godfrey and he is a Newfoundland Pony.)
Posted by Heather M. at 9:02 AM No comments: 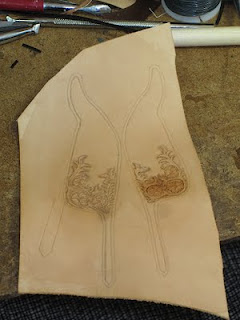 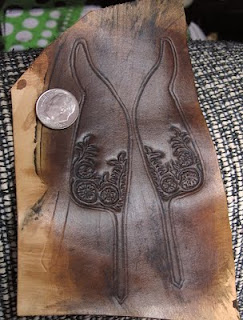 Above are Photos of the Fenders to the Saddle that my slow butt is working on.  The photos of them after they have been dyed is not entirely accurate.  The color is warmer and redder than what it shows.  I am very pleased with the tooling and I am now eyeing my original design for the first mother hubbard saddle that I thought too complicated at the time.  I am going to be redoing the bottom skirt to the saddle.  The reiner has a wider back than what My pattern had been used on in the past and the dye I used on the original skirt was old and craptacular.. so it just needs to be redone.

Also, what I think is important news - I bought an Unpainted Stone Saddlebred Last night.  YEs, this means double bridles and cut back saddles are in my future and I do remember the nice folks that have written me specifically to ask for a saddleseat set ;0)

I haven't yet heard how the Western Show halter will be offered by Rebecca Jann...  Will keep everyone posted.

I am going to try like mad to Donate something to Heather Jackson Lain's Show this year and If the NAN Folks will have me, I'd like to try to donate something nice to NAN.

On an entirely different note.....

Today I am trying to not watch the September 11th Attack Memorials.  It's not that I don't think that they are important. I do. I believe that they are very important and I think it's wonderful of the networks to actually have a heart an show them.  It's that I'm too emotionally fragile to watch them.  I am a "weepy" person to begin with and after the loss of my Dad in June I find myself being in almost constant emotional turmoil.

Part of my psyche that allows in all of the artistic inspiration and ideas is also the part that makes me very susceptible to sad movies, sad shows, and sad news reports.  I found this out the hard way, after at 13, my first boyfriend and I had broken up a month before and our class went on a field trip to see the play "Camille" at actors theater of Louisville.  I'm pretty sure I was the only 13 year old girl crying at the end of the play. (it's basically Moulin Rouge decades before they made the movie)

I distinctly remember the day that the attacks happen.  I had gotten up earlier than usual at 9am for some reason.  At the time I worked second shift and didn't get off of work till midnight so I didn't go to bed until 2am or later.. so 9am was very early for me.  I remember turning on the TV, and was sorta shocked to see what was in front of me.  I hesitated for a minute and but then went to wake up Anthony (yes, we've been together FOREVER.. LOL) telling him that he had to see what was on tv... we just stared in shock.  I watched every minute of coverage I could for the next week - hoping against hope for a miracle that they would find survivors in the rubble... They didn't... As everyone knows...  I feel very deeply for the families that lost their loved ones..

I thought today that I didn't remember what day of the week that it was when the attacks happened... but as it turned out I did. It was a Tuesday and clearly, I'll never forget it.  I think that eventually this day of remembrance should become a national holiday here in the U.S. 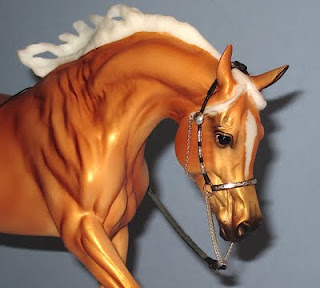 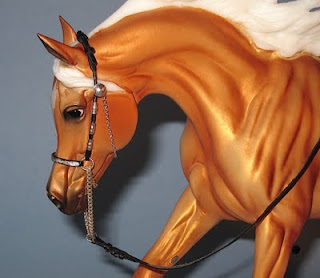 My work has been used at countless Live Shows in Performance (and some halter!)
and is Live Show Quality and correct. I have also been fortunate enough to have
been invited to Sell my work out of the Kentucky Museum of Art and Craft
Giftshop as well as the Autry National Center's Museum of Western Heritage Gift
Shop. (and I have sold pieces through both venues)

I do not currently take orders because my time in the studio is very erratic.  (between work, an ailing mom and a three year old....) I don't have a large production schedule so this could be one of the few pieces that I offer this year.

This halter has been made with Real Black Leather that was professionally dyed.  There is a tiny, working roller buckle at the poll and there are two keepers. (one "roaming" and one stationary)

The Beads, the conchos, the jump rings and the nose plate are all real silver.  The conchos and the noseband have been hand made by me and hand etched.  All silver, with the exception of the chains, have been coated to retard tarnishing.  There is a long lead with a "Stopper" on the end of it that is of course, attached.

These halters have gone top Ten At NAN several times on "other showmanship" set ups.  They have NAN Qualified countless times on horses across the country.

You can also buy it if you just want to play with your ponies, like I do. LOL!

The halter is $80 Postage paid and a lot of people really love their arabian show halters.  I don't know of too many that have been offered for sale over the years.  This is one of those pieces of tack that is rather "classic" and always works in Live shows and Photo Shows.

I'm going to go ahead and start taking names for the Arabian Show Halter tonight at Midnight EST (Monday September 12th) and it will run through Wednesday September 14th at 9 pm Est and then pull the name on Wednesday.

I go to bed at like 9pm est so as soon as I get up and can get to the computer in the morning,  I'll acknowledge any entries that I've received overnight.

The winner is drawn by a number system. I put each name on a spreadsheet which automatically assigns a number to them. Then I use the random number generator online to pick a number. The winner has 24 hours to contact me. If I do not hear from you within 24 hours then I will draw another name.

Please email me at tackmaker@desertnightcreations.com OR tackmaker@gmail.com. If you know that your ISP is wonky about putting emails into spam folders or discarding emails please let me know when you submit your entry.

PLEASE PUT "Arabian Show halter Lottery" IN THE SUBJECT OF YOUR
EMAIL. In the body of the email, I need your name, address, and phone number (in
case there is an email issue between ISPs)

I accept Money orders or Pay pal. My pay pal does allow credit card payments. I DO ship internationally and my work has made it to Great Britain, Australia and Germany. My pay pal address is  tackmaker@desertnightcreations.com

I can not do any trades right now.

Shipping is postage paid to the Lower 18 states in the United States. Anywhere outside that will incur shipping charges. I do not make you pay for boxes and bubble wrap, only the actual shipping and insurance.


Ok that should do it for the Lottery Info.. more in a few! 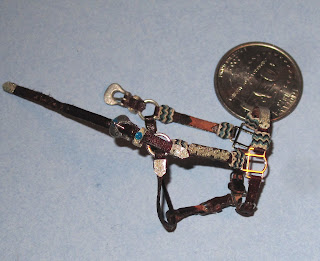 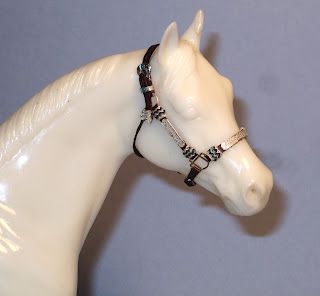 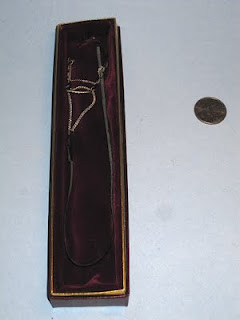 The first two pictures are of a western show halter that I am donating to The "B.O.M.B." model horse show that will be held in Nicholasville, Ky on Sept 24...  It is being run by Rebecca Jann who is a really nice local Breyer Dealer.  as soon as I get it shipped and get info on how it will be offered by Rebecca, I'll let everyone know.  It took me over a month to make because I don't normally get a lot of time in the studio during the week.

I ahve been tooling the fenders for Chelsea nichol's set but it's been slow going.  Actually everything is slow going around here.

The last picture is of one of my new packaging boxes.. Obtained rather cheaply from Clearance at Rio Grande.  I thought I'd try to class up my operation a bit.. lol

I haven't fully recovered from my dad's passing.  Some days/weeks are better than others.. This week happened to be a hard one.  Lots of dreams about dad this week has made me more melancholoy than usual.  I probably will never "recover" but I hope to eventually have more good weeks than bad..