Pictures of the Knots! 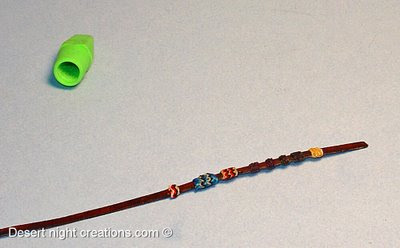 Above is a picture of three knots that are double interwoven. Please forgive the colors on them, the camera distorted them. The colors in person are much more attractive.

It turns out that my first attempts to do a double interweave were wrong. I figured it out the next day after I looked closely at some real double interwoven knots. The interweave should "float" (or what I call float) one on top of the other. My first attempts at it were sorta "winged" and therefore wrong. I went back to one of my Gail Hought Books and I was able to quickly understand why my attempts were wrong and learn the right way. This is thanks to already knowing the basic knot really well and the interweaving really well from her books. It's also in part to Susan Bensema Young and I talking on the phone so many times about knots and weaving.

As you can imagine, my brain is ON FIRE again at what I can accomplish and it's also given me a boost to learn that four bight long knot. I now understand that the more bights on a knot, the wider the knot will be. Wider is not better for Miniature scales and I better understand the "knot conversation" that Susan I had earlier in December. (I allude to these conversations because I know that Sue Reads my blogs

I'm finding that knot work is a good "Filler" for the desires I have to do silver working but I am unable to until I set up a metal working/dremel station in the basement. (Due to my son not at all liking the sound of the engraver, pounding of metal and dremel).

If you haven't noticed, I treat my "creative" side as though it were an entity unto itself instead of being part of my own brain. I don't know if all artists feel this way but my "muse" definitely has her own mind and desires and more often than not commandeers me into doing what she wants to do instead of what I have planned out. She was on vacation for most of the time I was pregnant and I'm glad she's back. I should probably name her because I name everything... I'll get back to you on that.

MY husband and I mapped out a plan for a room down there but we're finding that the electrical supply is limited so moving my whole studio down there isn't feasible right now. This whole house is such an "issue" and a "conundrum" since the housing market tanked... oy.. I won't get started..

Anyway, look for more braided miniature tack in 2009. I understand now why it consumes Sue like it does! hehehe

While I still haven't learned a long knot, I have learned how to raise my seven part six bight turks head in order to intewreave it with three herringbone rings instead of just one. I also taught myself to put in a second color of interweave tonight and I learned that I should have done it with string instead of string and rawhide!

No pictures yet because I'm exhausted but I'll have some up soon!!

And a big thank you to my husband who allowed me to get two and a half hours solid in the studio tonight!!!!
Posted by Heather M. at 10:00 PM No comments:

Firstly, Happy Holidays to everyone! I hope that your days have been lovely and filled with happiness!

Secondly, I haven't got a good update for this week. I have spent the last four days in the grips of migraine/shoulder problem and I've spent most of it in bed. This is extremely frustrating for me because Hubby is home and I could've spent a good amount of time in the studio.


Right now my shoulders are very "touch and go" and I hope that it is finished with me for this month.. Those of you that remember me from breyerfest a few years ago when I had the same problem know how much pain I've been in. This is one of the major reasons I don't take orders. This "condition" strikes randomly and doesn't go away with medication or sleep. I think I may have to get physical therapy again to get control of it.


ANyway, I will be donating to Heather Jackson Lain's show. I intend to do a bosal of some sort. I started it once already but I didn't like the way it was coming along so I tore it up..


I am also planning on donating to the NAN auction this year if they'll have me :-) 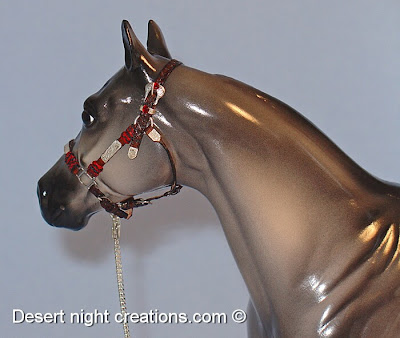 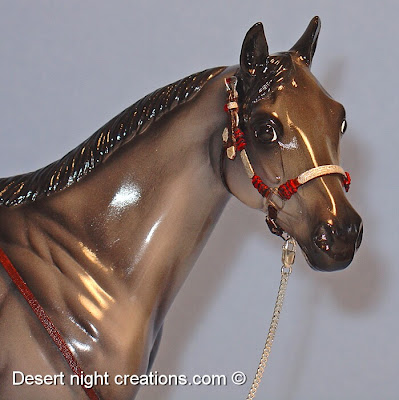 The above halter is still available and probably will be until after Christmas. Stupid me, I didn't realize how close Christmas was because I've been holed up in the house. I envisioned the halter for darker color horses like the one above where regular colored tack doesn't show up very well. Red and Black are the University of Louisville Colors and are a lot of other schools' colors so I figured that someone that based their performance set up on their school colors could probably use it. But I'm sure it'll sell eventually.. I just have to find the right buyer.
Christmas time is very busy for a lot of folks, and we're no exception. Munchkin is also a year old now and has decided that he doesn't need any naps so my time in the studio is at a minimum now. He also doesn't like the sound of the dremel or the engraver when awake or asleep so we are considering moving my studio to the basement. Actually, it's almost become imperative to move my studio to the basement because I'm at an annoying and frustrating stand still.
I have a part of one shank of the bridle plan below finished but getting the rest of it done may be impossible until after the holidays. I'm trying to acclimate munchkin to the dremel by using it in front of him but so far he really doesn't like it. He makes a grimace and then starts to tear up. : /
Progress on learning a "Long knot" of some sort has been at a standstill this week as well. Just no time to myself during an "awake" period. I can't do any braiding or knot tying when I'm tired because I forget how things go and I mess it up every time.
It's supposed to be 60 degrees here tomorrow due to a freak warm front so hopefully there will be some sun and maybe I can take munchkin to the park.
Happy Holidays!
Posted by Heather M. at 9:09 AM 1 comment: 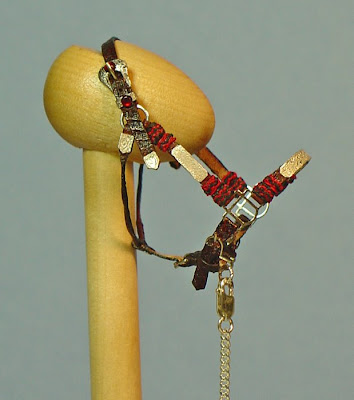 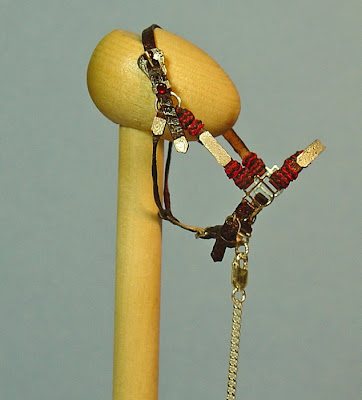 This halter is available as of today! It is $170.00 ppd. It features real silver plates, real woven knots, real swarovski crystals and a matching lead. if interested, please email me at: tackmaker@desertnightcreations.com I accept pay pal or money orders.
Posted by Heather M. at 8:23 AM 1 comment:

Sometimes.... I want to run away to an artist colony 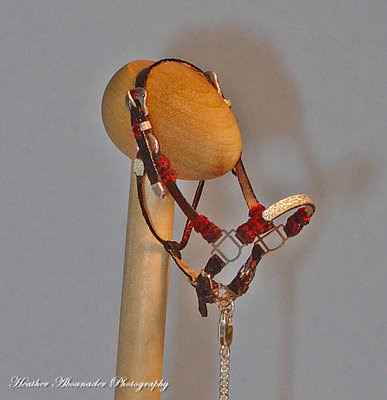 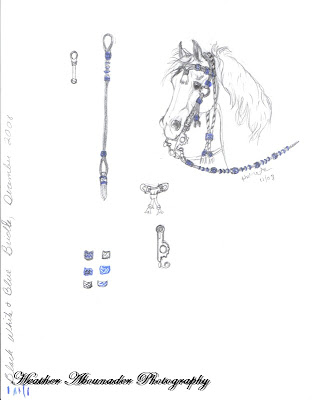 I know, thats kinda weird but there are days, like today, that I wished I had more artists literally within my space. I work in a vacuum sometimes, all alone, allowing in only inspiration and my own way of doing things. Actually I work that way a lot and here lately, far too often.

I want to feel that creative rush that one gets when they're around other inspiring artists. The internet is pretty good at this, but sometimes there is nothing like watching someone else's process
in person.

I'd bring my son with me too. Somehow I'd have a safe environment for him to play in while I worked. I'd also like him to be exposed to other creative people and maybe their kids. My cousin (Melissa Moreton) lives in Idaho on an artist colony so maybe we should go visit her sometime....
I'm just daydreaming outloud, forgive me...
The First photo above is a miniature western show halter with braided buttons - turks head knots with a single interweave and a herringbone interweave.
The silver noseplate has been engraved and attached. I need to work on the cheek pieces now. It's hard to engrave because munchkin is afraid of the loud noise, so I have to do the silver engraving in the evenings when my husband can watch him or on the weekends.
When I engrave, I normally need to engrave all of my plates at once because everytime I engrave, I do it differently. I always try to do it the same but it depends on where my head is at the time.
The second picture was a blast of inspiration I had last night after viewing Gail houghts website and Susan Young's website. I really want to make a black braided bridle. Sue normally maps out her tack by drawing it out . I have never done this before but for some reason I really wanted to do this. The drawing is crude but it's a good general idea of what I'd like to make here in the near future.
I have the silver bit already scratched out onto the silver but there is a ton of silverwork left to be finished. I have no idea how long it's going to take to make that bridle since I intend to learn a long pineapple knot. I only started looking at it today though which means I have a long way to go.

I'll also be looking for a job and a daycare for munchkin after the beginning of the year so my time will be more limited. But.. there is always time to create even if I have to forgo sleep and work at midnight.. :-)
I

Ok, real fast, cause my husband's family is staying with us - I am trying to learn the gaucho interweave on a 6bight turks head knot. I figured that since I know the six bight turks head so well by now (after interweaving it with the herringbone so often) that I might as well go for the gaucho interweave as well. After a couple of days of working on it, I have not mastered it yet but my brain more easily understands it than I initially understood the herringbone.

And while I find not picking it up as quickly as I'd like a bit frustrating, I have to admit that I'm having a great time trying to learn it.

I also want to learn to work silver a bit better so I've been working on that as well on paper. It is hard for me to find time to work on etching silver while the baby is awake (because my engraver is very very loud and I can't work on it while he's sleeping) so my silverwork will have to wait a bit before I put it into practice.

This weekend will be swamped with Munchkin's birthday party but I hope that maybe sunday I'll get a bit of time to myself to work on silver..

Pictures when I get close to having something to photograph!
Posted by Heather M. at 4:27 PM No comments:

I just want to put a reminder here that I am taking names for the halter lottery through tomorrow at noon. (halter pictured below) So if you read my drivel here and you'd like to enter for an opportunity to buy the halter, just email me at tackmaker@desertnightcreations.com
Posted by Heather M. at 10:31 AM No comments: