Not a Lot of progress 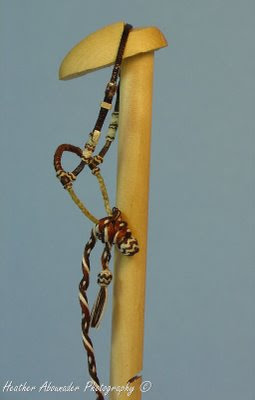 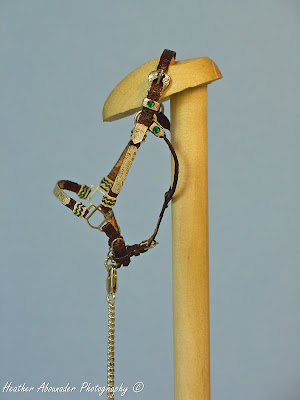 I haven't made a lot of progress on the cinch. I finished up the weaving that I was working on and I've put it aside to concentrate solely on the cinch now. I had a period last week wehre I was feeling super creative and I started several different things, but this week I've been tired so I haven't progressed much. I have an idea on how to try to make the cinch a second time thanks to my Friend/Mentor Susan Bensema young but I haven't gotten very far with that Idea.

Last week I also bought a blue sheet of poster board and I've been playing with lighting techniques in order to get a some good, more professional pictures of my tack. As you can see, the photos above are a bit dark. The Funny thing is that my old point and shoot camera takes better pictures of the tiny stuff than my DSLR because it has a built in macro lens. Unfortunately, though, the old point and shoot camera is only 5 megapixels and the DSLR is 10.

I'm also realizing that if I want to sell to "upscale" clients I need a website overhaul. I don't think I have the "foo" to overhaul the website and make it look the way I want it to so I may have to eventually have someone else do it. So many ideas in my head and so little time!!

I also started thinking about eventually doing a 1/6th scale braided bridle. There is a group of hobbiests that collect the 1/6th scale Johnny West Riders and horses. They are very very nice folks and are not as competitive as the 1/8th scale folks are. It's a relief to talk to them sometimes. They're a very close knit group and are very creative. I think it would be fun to work on something a tad larger than what I'm used to working on. The larger the piece the more detail I can put on it. The problem is finding the right scale hardware. Rio rondo has some pieces that help out a lot (in fact I'll be using one of their bits for the braided 1/6th scale bridle) but they are still working on things like halter rings.

There is a man within their hobby, Luis, who sculpts and who is kind of an "agent" For a miniature tackmaker in Mexico. (Luis is in mexico too) This tackmaker is astounding! He makes the miniature mexican style saddles with all of the extras like embroidered saddles and silver pieces. I believe he's also responsible for the trees and other accessories that Luis sells. He's really inspiring to me! I'd also like to buy one of Luis' 1/6th scale resins some day so that I can make tack on it.

If you can't tell, I like to read about and make myself aware of as many different hobbies as possible. The more I learn, the better my miniature work becomes. At one time in my life, I was very fond of saying "I'll never do this or that". Putting limits on what I would learn such as working with silver. It wasn't until I was given the amazing opportunity to have my work sold from the Kentucky Museum of Art and Craft that it dawned on me that I should work with as many "Real" materials as possible. They suggested that I learn to work in silver because to them, the silver tape just wasn't good enough. I'm glad they planted that seed in the ole noggin because I think my work has definitely benefitted from it.

I have been thinking lately that I should also work on sculpting my own saddle trees. I've been thinking about this because I want to make my work 100% original. There are may tackmakers out there with excellent saddle trees, so it's definitely not because those trees aren't good enough. I have a thought about a wire armature that I could make in order to sculpt a saddle tree over top of it. If I make one good enough, then I could eventually have them cast. Thats way off into the future though.

I tried to enter the "Art of Horse" magazine art competition with one of my bridles as a soft sculpture but they informed me that my bridle was ineligble. I entered some of my photographs instead. This of course inspired me to make another bridle strictly for entering art competitions with. I really think that people need to see the miniatures that the 1/8th scale hobby produces because they really are works of art. I feel like the bits and buckles and the little things that Rio Rondo has for us to use are really no different than "found object" sculptures. Wonder if the art world will agree with me?

Lastly, I'm working on my model horse tackmaking article. It's not a "how to" article, it's a general advice article. I believe in everyone finding their own path and to tell someone how to make something is circumventing that process to me. Also, I'm far from organized enough to do a "how to" article. You should see my studio, it's a total mess now. Not my normal "messy" which means organize chaos, but a real, downright, "Holy crap where is everything" mess... Anyone know someone that organizes for a living? 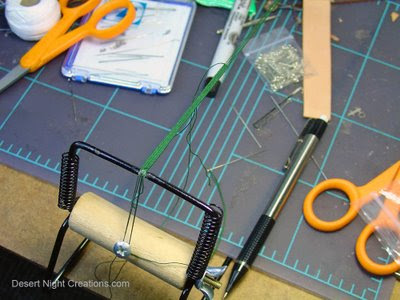 I watched a biography on Frank Lloyd Wright this evening on the Ovation Network. I feel really inspired after seeing it. I had only ever glanced at the outside of a Wright Building and they felt too modern and "ugly" to me. This evening, they showed the insides and the view from the windows.. I was floored.. I absolutely loved it!!

It has inspired me to maybe thing about a western saddle set (or maybe parade..hmmm.....)after I'm finished with my current project. I "feel" like maybe a fern motif or something that is definitely nature inspired.

I'm still banging my head against the weaving but I actually made a mental breakthrough today. I'll finish up the current weaving I have for a native arabian halter and then move forward to another one using what I "think" will be a new technique. I don't want to reveal it yet because I have no idea if it'll work. Above is the current halter being woven..

In case you're interested, Susan Bensema Young updated her page this evening with the most beautiful bridle and breastcollar set!!! go see! go on.....
Posted by Heather M. at 9:46 PM No comments: 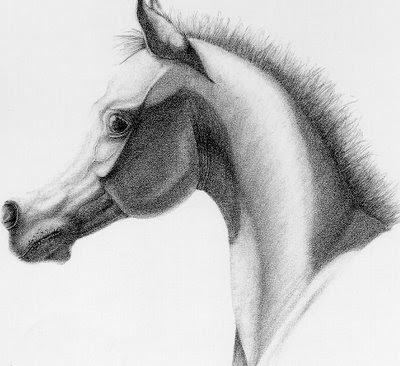 ("new year", pencil)
and that is definitely true for the cinch I'm working on. I know that I'm not alone when I say that making that cinch was much easier to create in my head. Meaning, that even though I *thought* I knew how I was going to make it, it's not the way it's turning out at all.
I've made two cinches so far and neither are good enough. I decided to "retrain" my brain to weave and see what I could come up with from there. I've broken out the ole bead loom and I'm working on a native arabian halter. Now I know that the two don't seem to be related at all, but they are. They are both woven. So in making something that I already know how to make to boost my confidence and get my brain retrained, I will learn how to make the cinch I want. I do this a lot with things so I know this will work. (like the braided bridle and the braided halters which I worked on simultaenously).
Above is a drawing that I did when I was in my early 20's. Like a lot of folks, I desperately wanted to be a fine artist when I was younger. Unfortunately, while I had the talent, I was too insecure and immature to go to art school and really make it my path and hone my skills. I was too busy rebelling against authority to see that I was screwing up my "artistic" future. Luckily I fell into Technology and was able to make a living despite myself.
In learning photography, I've actually deepend my drive to make miniatures. I don't want to lose the skill of being able to make them like I lost the skills to draw and render well. It took me a few months to really realize that I missed making miniatures immensely. I will be more focused on them in the future. I've worked very hard to get where I am and I don't want to lose the skills that I've obtained.
I sold the above drawing as a donation for an Arabian Horse Rescue and I've lost track of it. The scan above is all I have of it, and it was done at a time when technology was not able to the drawing very well. (thus all of the white spots you see). I hope that the person that has it now cherishes it as much as I do :-)
Posted by Heather M. at 2:37 PM No comments:

I am really trying...

The above Cinch was taken from a High Noon Catalog. I in no way take credit for the photo or the cinch.

That said, the cinch represents what I want to attempt for my mother hubbard II saddle. I have no earthly idea how it's made, or how I'm going to get that kind of decoration on a miniature cinch. I am re-learning how to make a cinch, using Carol Williams' kit from www.riorondo.com . I made two the last time I made one for the Mother hubbard I set. ONe practice, one production cinch.

This time, I'm using completely different materials than just the dmc floss as recommended by Carol. I'm using Alpaca yarn and dmc floss on the practice cinch, which was shown in the last blog post. I've learned alot so far.. namely that one has to be VERY careful to not pierce the yarn.

I've been working on how to weave the decorations but I haven't figured it out yet. I worked on it for about an hour this morning while munchkin slept, but I didn't get a lot accomplished. He's only sleeping an hour at a time now, which for a miniature maker, is like a flash in the pan.

I totally miss those days when I could bang my head against something for a couple of hours straight. That really went a long way towards figuring something out and making my work as detailed as possible. Not that I'd trade him for the world.. just lamenting a bit..

I almost don't want to post that photo because I have no idea if I'll be able to copy it in some way, but now that I've posted it, I have to..

The Model horse market right now has crashed. I can't sell a danged thing! LOL!! I really need some kind of money coming in but that isn't happening. I know though, that I'm not the only one..