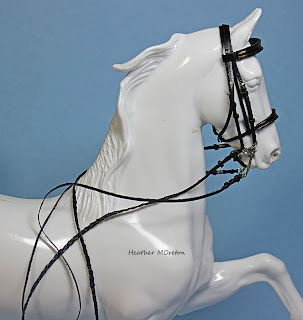 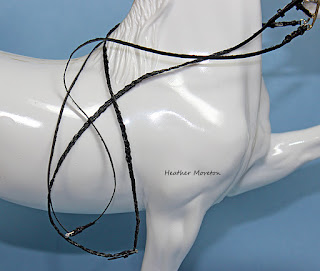 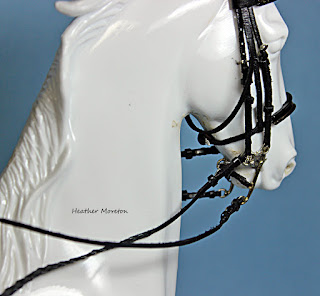 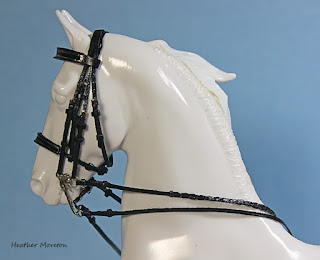 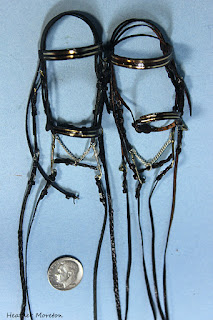 It's been a while since I REALLY posted. I mean REALLY just let fly what was rattling around in my crazy brain so I'm going to let fly tonight.

Ok, Firstly you can see two posts down I finished Ann B's braided reins.  I think they're the finest I've done to date.  I'm super pleased with them.  Poor Ann though, I haven't shipped them yet.  I am very forgetful now (more on that later) and I haven't gotten my stuff together enough to ship them.  They are at work, On  my desk, waiting for me to remember to bring a box from home. or to find a box there at work.. sorry ANN!!!!

Secondly, I finished up Robin Smith's black and gold bridle.  I'm fairly pleased with it as well.  Robin was nice enough to send one of my older bridles, the matching one in brown in fact, to me to repair a piece on the caveson.  It was invaluable in making the new one.  I have in fact not made a double bridle since about 2006. I was super rusty.  The learning curve, or ramp up curve was quite steep but as always Robin is very patient with my crazy butt and allowed me to finish it in my own time with no pressure. That is awesome.  Robin is a long time friend and customer of mine and I'm very grateful for her :-)

It took me 17 Crown pieces to finally cut one that was good enough to use.  It took me at least 20 reins before I was able to make one laced snaffle rein.  Only to figure out I had made it too long.  I can't even begin to tell you how many feet of 1/16th leather it took me to make the lacing for the reins.  I had to skyve it down very close and then cut it in half.  The Browbands and nosebands on those bridles are real gold wire.  So the pressure to make it right with very few mistakes was high considering the price of gold right now.

On the black bridle, all of the buckles are roller buckles with the exception of the lipstrap buckle.  That would've just been too bulky.

As I was making that black bridle, it dawned on me that I need to teach some other people how I make tack.  As I get older, and weirder and life gets much more busy and different, I realize that I may not be able to do this forever.  So if someone wants to come and learn how to do some stuff, you're welcome to.  Just clear a weekend with me and I'd be happy to have ya.

Speaking of teaching folks, I am lucky enough to have a very talented apprentice (so to speak.)  Her name is Danielle Hart and she's more talented than I ever though about being.  She also has the luxury of time right now and she is zipping through learning knots.  I taught her how to make the western turks head knots western show halters with real silver and they are just as nice as mine.  That was a hard thing to do since I considered my work rather unique but I realized that the hobby has room for a few people that do braidwork and work in silver.

In fact, I feel like the hobby has taken a leap forward with tack and I need to catch up! LOL!

For the first time since I started making tack, I currently have no backlog.  I don't know what I'm going to do with myself but I have a braided bridle in mind that I want to make, and have wanted to make for a long time.  Pictures to come when I actually start on it!  It will have a hand made bit.  One of my goals for the near future is to move forward with working in silver and perfecting my western saddles a bit more.

With a loved one's death, when one is my age (40 +) one starts to re-evaulate their life.  I'm no different.  I realize that I am no where near where I want to be in life when it comes to my art.  I have started drawing again and I plan to start painting again.  And my drawings are cartoony and have backslid from  when I was in my 20's doing hyper realistic graphite and the immense amount of caffiene that I inhale makes it hard to focus.. but I want to move forward with that.

In saying that, I do NOT intend to stop making miniatures.  In fact, I think that my miniatures have a place in the world and the more I work on them, the better they get and the better my skills in all realms get.  I realize now that I don't have to be one kind of artist or another. I can be me, and do photography, and paint and make miniatures.  They're all an expression and an extension of what little talent I have.  I've decided to stop defining myself based on what I thought in the past.  Or How I was raised, or treated or even what I've become to date.  I want something different and I will achieve it.  It may be now, it may be after I'm elderly. I don't care. I just want to get there eventually.

Work has been very busy. Very.  If you don't know already, I am a network engineer for a wonderful company.  A company literally full of rock stars in their IT department.  Everyone in that department is excellent at what they do. There are no slackers or bad apples there.  Everyone has talent there.  Everyone strives to be better and our managers do everything in their power to make doing these things easier and shield us from company politics.  In return they expect us to live up to our potential.  That is the hard part. The "busy" part.

In the world of computers, servers, internet etc there are millions of things to know and learn.  You can't just learn one thing and rest.  That is impossible if you want to stay employed and "current".  I am trying to learn how to balance my drive to be an artist with my need to reward the people that I work for with hard work and learning everything that I can.  It is not an easy path.  There are days I want to quit because it's so hard and I'm so tired....  but I'm proud they allow me to play with their toys and their servers.  I'm proud to be a part of that team and be a part of what they do.  I won't even go into the part where I'm a woman in a predominately male field.. So I can't just quit...

I'm also a mom to a really smart little boy and I'm married to a man who can tell the difference between french provincial and modern art and they deserve time now too.

I am now on the other side of grief for the most part.  I cried today watching the Yves Saint Lurant documentary that is told by his life Long partner Pierre.  it was therapudic... and made me a bit nostalgic and helped me to realize that I'm better emotionally than I was.

I have also put on a good 30lbs in the last year.  Which is so irritating to me because I worked so long to be a healthier weight and I had kept it off for 3 years.  Depression and grief triggered my binge eating disorder and now I'm overweight again.  In the last two weeks though I've been better about excercising and I'm almost back to being internally motiviated to walk my 3.4 miles again and not eating pizza 4 times a week.. lol

I'm very into documentary about artists, and geniuses of any kind.  I'm inspired by their vision and it helps me to move forward.  I highly suggest the "Art 21" PBS Series as well as the "Craft in America" PBS Series.  So inspirational..

Maybe I'm a tad dillusional to think that I have anything in common with people that I would consider working artists, but I am working on that too.  I'm working on thinking and realizing that what I do is art, regardless as to what any kind of establishment would think.  it is. I make it for no other reason than to please people and to make it as perfect as I can. At the very least I am a fine craftsperson.  I am going to make the world realize that we tackmakers are artists and that what we create is real, art.  Just as legit as doll houses or diroramas or anything else that is seen as a more traditional craft.