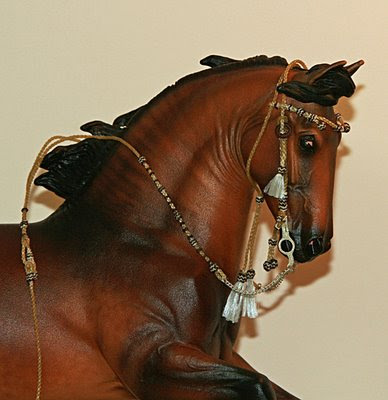 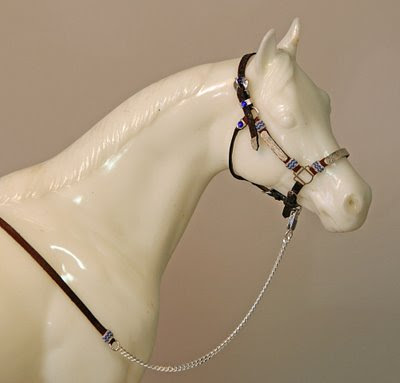 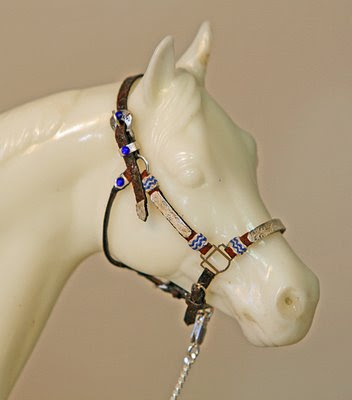 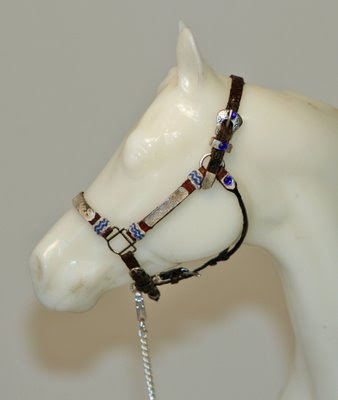 Above are photos of the halter completely finished and ready to go! Good luck and thank you to all that enter the lottery! I draw the names tonight at 9pm est!
Posted by Heather M. at 4:10 PM No comments: 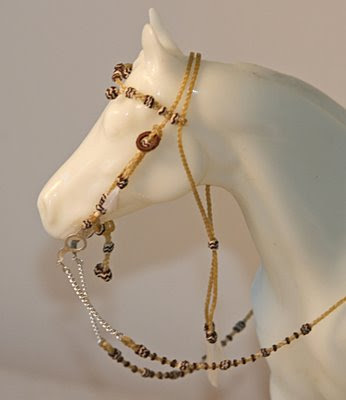 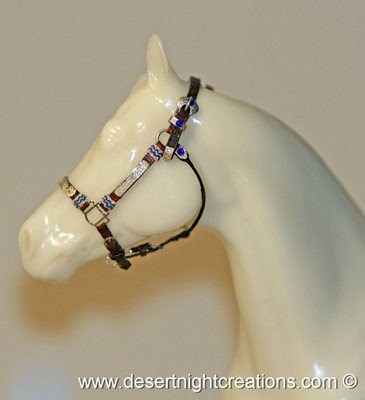 I am lottery-ing off the above halter to the folks on my yahoo group and to those that subscribe to my blog. It's a "Thank you" for being so patient and supportive of my big slow butt!

I thought I was finished with the mother hubbard bridle but of course I had to do ONE more knot on it and then I messed up the actual knot underneath so a part of the reins will have to be done over.

Also, I got a tip from a wonderfully talented woman (jacquie who was at the Artisian's Hall at Breyerfest next to Liesl Dalpe)that went from braiding life sized bridles to braiding model sized bridles. She told me to look into drop spinning and alpaca yarn for mecates! What a revelation! DUUHHH!
I've been overwhelmingly busy with photography and model horse stuff! I've been meaning to blog for over a week now and I just got to it today.
I don't know if I've mentioned it but I've set up an "e-commerce" site for my photography. http://abounaderphoto.smugmug.com
And I have a photography blog: http://abounaderphoto.blogspot.com
Munchkin is now sitting up and crawling and he is into EVERYTHING! This is actually a great sign and I'm so pleased with his curiosity.
I've also been dealing with a touch of post partum depression. I've never been good about going out of the house and over the last three months I've been much worse. I'm seeing a counselor though so I will be much better in the future. I day dream a lot about taking munchkin places and taking his picture there... Like taking him to the slugger museum or taking him to the park and taking his picture in front of well known Louisville Landmarks... Hopefully I can actually do that soon.. I think it would be adorable for his photo album.
Posted by Heather M. at 9:33 AM No comments:

THe halter that refused to "be"

I've been working on and off on a braided button/silver western show halter and I thought that I would be able to have it finished this week! Turns out that I had no idea how much more work it was going to take! There was some kind of chemical reaction on the noseplate and on one of the keepers and they both turned yellow. So I stripped off the coating, cleaned them up, sealed them and BAM it happened again! So this time I'm replacing them altogether. The noseplate isn't that big of a deal but to replace the keeper, I have to redo the whole buckle assembly! PAIN IN THE PATOOT!!! I'm committed though to having the thing done by monday! It feels great to be in the studio again!

I have entered some photos in the Capture Kentuckiana photo contest put on by the Courier Journhal which is our Local Paper! I'm having a ball uploading photos and rating other people's photos! Turns out that there is a Local "Photography Collective"!! WHO KNEW!?

You can see my photos here:

http://capturekentuckiana.com/people/abounaderphoto But unfortunately to vote for me you'll have to sign up on the website. (SORRY!) but I'd be very grateful if you did!