Before I fall happliy asleep here, I want to writ about how wonderful this Breyerfest/NAN has been.  I think that I have been showing long enough, and coming to Breyerfest Long enough to actually call many people "Friends".  This year, most of those "Friends" were here in Lexington, KY and I had time to sit and talk to many of them.  I truly feel like I belong to this hobby.  LIke I have a place in it and maybe I've made some kind of Small impact.  I've been given the sweetest little gifts of praise from many people and the gift of them allowing me to connect with them.  They also have given me tips, and hints, and been open with me about their methods of making tack and innovations.  I hope that I gave enough in return. :-)

I'm sad to say that Susan Taylor has stated that her hands are no longer allowing her to make tack, so she is liquidating her inventory.  I wandered into her hotel room tonight to see what she had and wandered back out shortly afterwards with new "Treasures" for my own Tack Collection. ( I collect tack as well as make it because I know the time and effort that goes into it".

The first picture above is my "loot" from her room.  Two Precious Bits hand made out of real silver by Carol Williams of www.riorondo.com .  I have been a long time admirer of Carol's skill and workmanship with tack.  She was a tackmaker before she was a sculptor and her fantastic talent shows through her tack pieces.  I am going to make braided bridles on those bits and I hope that I do them justice.

The Robin Clark (Sister of Ginger Ryals) bits are a rare find now a days.  Robin no longer makes them and hasn't in quite some time.  I acquired more of Robin's bits when she sold out about 10 years ago but I never had any of this kind. (the parade set bit was one of her creations)

The hammered silver wire buckles I bought because I've never been able to make them myself.  NOt because I can't, but because I rarely think about doing so and these are already made.  I think that I aquired a renewed appreciation for things that would save me time after I made my parade set.

The second picture down is of the New Morgan mold being produced by the Peter Stone company.  Morgan horses are one of the Breeds of horses that I really love and this guy really just screams morgan to me.  He's also in a nice, "normal" morgan color and I love a glossy model..

The Next picture is a Peter Stone Performance horse with a customized mane and tail as well as a lovely factory paint job.  He is a one of a kind piece.  I have a new eye for "performance" showing so I think he'll fit right in.

The fourth picture down is a Peter stone Ideal Stock Horse Mold with a braided mane and a customized tail.  He also has a lovely paint horse paint job in a nice "conservative" Bay pinto.  I'm thinking english trail with him and maybe whatever else I can come up with.  He also will make a nice halter horse.  He is a one of 10 run.

My "Breyer loot" is wrapped up still but I'll be shooting pictures after I Get home tomorrow.  I really bought a lot more this year than I have in several years

Today Anthony Brought RJ to his First Breyerfest and we really wore him out.  He saw a lot of horses but as usual his favorite things were the birds.  Sometimes a kid just like what he likes and no amount of outside influence will change that. (Trust me, I know.)  So we spent time out by the "Man O War" Statue to see the ducks and geese that in habit the fountain and the little pond near it.

I didn't shoot as many photos of horses this year as I usually do because I was spending time with friends but I still shot a lot of photos.  Unfortunately the Jousting was held inside the indoor arena so my pictures are awful.  For some reason I thought that the jousting would be held outside and that I would be able to get some decent action shots. Not so I'm afraid...  I got some photos of the horses and the "knights" but it was not at all like I pictured in my head. (Course.. what is? LOL)

Well, it's time for me to crawl into bed.. as I tweak photos I'll post more... 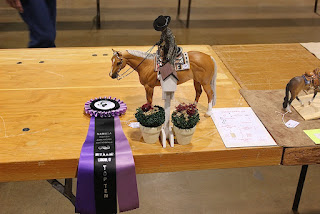 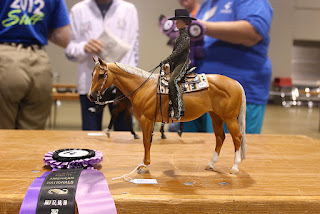 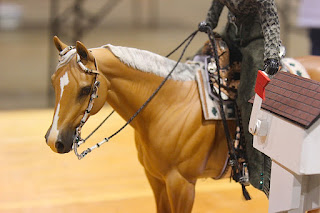 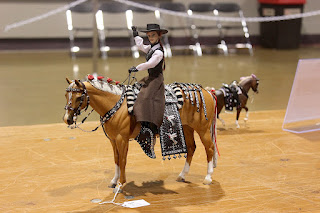 After a VERY long day Showing at The North American Model Horse Nationals (NAN) in Lexington KY, I'm thrilled to say that Managed to get two top tens out of three entries!  A top ten in CM/AR Western Trail (Stock horses) and CM/AR Western Pleasure (Stock horses)!  The saddle, should look familiar if you have been wonderful enough to have read my drivel for some time.  It is the "Anthony Saddle II" made in 2005.  I didn't have a true Western Pleasure Style Saddle of my own so Anthony was nice enough to let me borrow his. (With the Stipulation that I not sell it and that it goes back into it's case as soon as it gets home!)  The Bridle is new.  I figured that I would have less trouble with some nice black braided reins with some quick knots so thats what I made.

I think I would've done better in Parade if I had moved my breastcollar forward.  I think I knew that it went in front of the withers but the Jitters from NAN made me forget that.  OH well. there is always two years from now! LOL!

I proxy showed for my Good Friend, Karen Jensen and out of four OF horses she top tenned with three!  That Karen can pick a butt kicking OF!!!

I was even "good" in that managed to work a bit on some of my tack orders while waiting for my classes.

I was bad that I celebrated with Pizza but I will do a tremendous amount of walking today to make up for it. (or at least thats what I tell myself! LOL!)
Posted by Heather M. at 5:24 AM 1 comment: 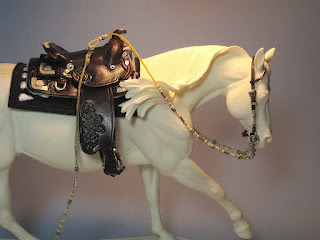 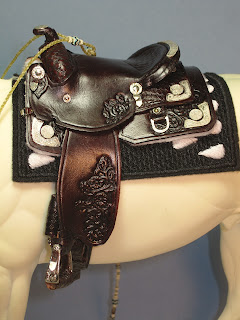 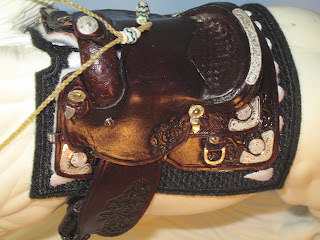 I'm pleased with the way the two part silver plates came out and I am very pleased with the cantle plate.  I have the breast collar started.. just need time to do knots.. NAN next week!  EEP!
Posted by Heather M. at 3:39 PM 2 comments: