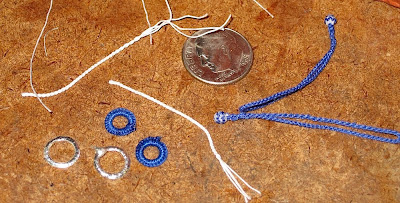 The first photo above shows one of the bit shanks being very close to finished. I started putting the "bit piece" on the second one but it turned out shorter than the first so I pulled it off. I'll have to give that another shot tonight. The first picture also shows the bare bones beginning of the cheek pieces.
The second picture shows a cheek piece in progress with the loop and the decorative knot over the top already on. It also shows the crown piece in progress. It is somewhat a relief that I don't have to do reins for this but I also have some anxiety about it being good enough to showcase susan's work.. Cross your fingers for me!!
This is the second incarnation of the NAN headstall. The first one, below, was waayy waayyy too big and In taking it to the craft store to get matching thread, I lost one of the cheek pieces. Thats fine because I had intended to start over anyway.
Then on friday I spent most of my studio time at night building the cheek pieces only to lose the very work I had worked so hard on. It is "somewhere" inside the house somewhere but I have no idea where. (This is one of the hazards of making tiny, tiny things..)Hubby even spent time looking for it after I went to bed and he couldn'd find it either. ( I guess I looked rather pitiful when I told him I had just lost everything I was working all night on.. LOL!) Thankfully I was smart enough to pay close and careful attention of where I put the cheek pieces the second time around..
Stay tuned as I hit this headstall "full on".. gotta deadline to reach!
Posted by Heather M. at 6:01 PM No comments:

Even the best laid plans....

After happily and proudly posting my progress in the last blog blather, I decided to remeasure the cheek pieces of the bridle. They are miles too long. I don't know how or why I managed to do that but now I have to entirely start over from scratch. I may go the more traditional route now and go with some solid cheek pieces and just a "Zebra Throatlatch".. and I may add in some black. Not sure.. I'll have to pow wow with Susan on that one when she gets back from her trip.
Oh well.. off to the craft store for more thread!
Posted by Heather M. at 3:31 PM No comments: 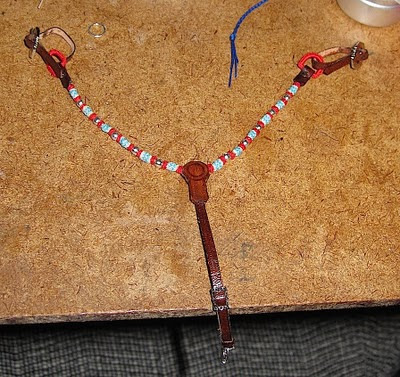 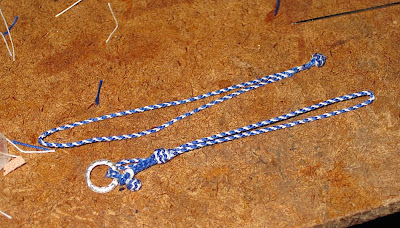 Albeit slow progress... The first photo above is the Breastcollar I've been working on for Alicia Vogel. It's 3/4ths of the way finished. It's just missing it's cool silver center piece. The only actual beads on the breastcollar are the silver "Disco"beads. The red knots are actually spanish ring knots and the blue and white knots are interwoven turks head knots.
The second picture shows my North American Model Horse Nationals Auction Donation in progress. I broke one of the bit shanks from messing with it too much (metal Fatigue) The precious "Dremel Time" that my husband was nice enough to work out with me today was spent making another bit shank. I still need to add "Faux" bit pieces to them as well but that is just a matter of time.
The blue and white braid pattern is a bit of a departure from the Traditional and "usual" headstall look. This bridle is something that Susan and I are putting together based on our experience braiding and researching bridles I figured that it would be nice to change it up a bit. There will be some solid braided pieces to give the eye a "rest" so that it's not so jarring. This is only the second time I've ever built a headstall entirely out of tatting thread. Normally I use artifical rawhide as a base and do the buttons using the thread. I was really worried that I had made a mistake at first but I've managed to somehow, and so far, to get the thread to work. Now my only problem is that I'm running out of the blue that Susan sent me so I'll have to go to Joann's Fabric to hunt up some more. Thankfully Susan was smart enough to choose a color that shouldn't be hard to find. (not surprising, that Sue is a smart cookie!)
My challenges over the past couple of weeks have been that I've been really really tired, and that my Husband has contracted Strep Throat this past week. I don't think that I have strep throat, I think that I just get up too early and I don't sleep deeply enough. I'm going to try harder to get to bed on time for the next few weeks so that I'll have enough energy to work in the studio and get everything I need to get done.. Done!
Hubby is on the mend now though after a trip to the drs and some anitbiotics. We're watching our son very closely to see if he has it. He's been extra tired today but that could be from getting up too early. We're hoping against hope that he side steps the strep throat because my husband has been very very ill.
I hope that you all are having a great spring and I'll blather at you again soon!
Posted by Heather M. at 4:10 PM No comments:

Oh Dear! Been too long! 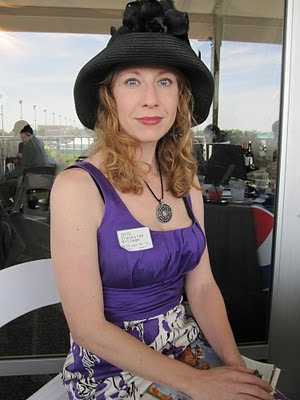 I've been so remiss at posting! I'm so sorry! This week is Derby week, and I was able to go to the track (churchill downs) this year on a company function. It was wonderful to be there during Derby week. Above is me - with my "derby" hat. IT's a bit small as derby hats go but I was just dipping my toe in the water so to speak. Next year, hopefully I'll be able to go to the track again and I'll make sure to get a more ostentatious hat! I have pictures from the Track that I need to tweak and then post somewhere. I wasn't sure what the accommodations would be once I got to the track so I decided not to bring my digital SLR. I brought the point and shoot instead. I wish now that I had brought the "big" camera but that'll have to wait until I visit the track again. (soon hopefully!)
Progress in the studio has been painfully slow. I've not felt my best this entire month. I've been utterly exhausted by 8pm every night, which is when I finally get studio time. I then go to bed at 9pm to get up by 5am and start my day again. I am thisclose to finishing alicia vogel's breastcollar that matches her bridle and then it's finally onto the joint NAN donation with Susan Bensema Young...
More updates as soon as I can!! Happy Derby Day!!!
Posted by Heather M. at 10:22 AM 1 comment: