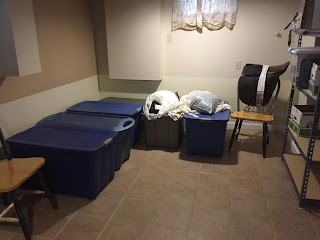 Above is a photo of how my collection is currently "Living".  Since the flood I had to pack them up and have them live in those totes.  I also can't currently have anything breakable around because as much as I love my new cattens (cat + Kittens); they are Hoodlums!  absolute hoodlums.  They still have big time kitten energy and they race around the house when we get up in the morning.  Previously I allowed them in the basment around my collection and they destroyed a few precious models.. But it was my own fault. I was used to my "Old Lady" Kitties that left my things alone.  So I had the basement off limits to them.  Then in February after a wet winter, we received 2 inches of rain in less than an hour and my basement flooded with about a foot of water.  Any paper things I had in my basement were ruined.  Lost a lot of collectible magazines (Araber Journal with simeon Sadik as a yearling for one) and other things.

I'm still kind of hurting after losing so much of my stuff, but I finally have the emotional energy to unpack some of my collection again.

The first thing I needed to do was to change how my collection is displayed.  Clearly I can't just get some particle board shelves that are open faced like before.  Cattens will try to get up on the shelves or launch themselves from the top.  So whatever I get I'll have to anchor.

Secondly, I don't want things to fall over and break.  So the only way I can think to fix that is to get enclosed Cases which means (to me) Curio cases.  Although I am capable and creative, I am not handy and the last thing I need is another hobby.  So buying shelves then figuring out how to put doors one them was out.  Seriously I just don't have the energy and time.  I don't know any handy folks either that would put together something for me.. so Curio Cases it is.

I surfed through Craigslist Louisville and for some dumb reason I can't search furniture and then search by date. Same with Facebook market place.

Diana Dubbeld Lives in Louisville and she is an avid peddlers mall shopper.  She would sometimes be nice enough to send me pictures of curio cases she saw at peddlers malls. So She inspired me to go look in local peddlers malls for reasonably priced curio cases.. I even ended up seeing her yesterday in one by chance! lol

Today I continued shopping for Curio Cases.  My exhusband/Friend was nice enough to go with me so that If I found something I'd have a way to get it home. (He has a grand cherokee jeep)

We found two, GORGEOUS curio cases that were reasonable amounts of money at a peddlers mall and we were able to get them home, one at a time.  I'm thrilled!

The first one is a "Side" loader, which i'm not wild about but I really needed a case so I'm going to go with it.. lol   The Second one, smells like it lived in a basement for a while so i'm allow it to air out before I put anything in it. Also it has a closure that is too tight- it's a roller/metal pinch thing and when I open it it shakes the whole cabinet.  That will have to be changed out.  I was thinking about a Magnet catch but I am reading that they can be too strong as well.  No
t sure yet what i'm going to do..

Although this is silly- I always thought I wasn't "Fancy" enough for nice cabinets for my collection.  I realize that is just dumb.. lol so I'll be looking for more reasonably priced Curios when I have more moolah...  More pictures when I have some of my "lovelies" back on shelves! :) 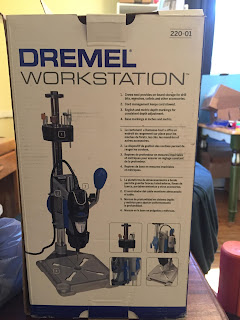 Also I bought a new Dremel Workstation.  This way I can actually poke holes in silver when I need to and use the dremel with a flex shaft so that I can hopefully engrave better and be less wear and tear on my hands..

I'm hopeful for being able to work a little more in the future so that I can create more tack!
Posted by Heather M. at 9:09 PM 1 comment:

Look! I finished Something Part 2!! 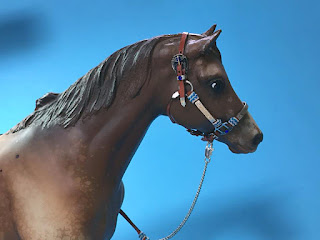 Look! I finished another thing!  I'm kinda proud..   I'm pushing and pushing myself to get back in the studio. My problem is having time and energy but I'm pushing!  I started working on a Tennessee Walking horse Bridle and a saddleseat bridle but I was just so tired and my skills were rusty.. So I needed a pickmeup in the shape of things that are easier and make me happy to do!  It also reminds me that I can do these tiny things and i'm pretty good at it :)

Look I Finished Something Part I 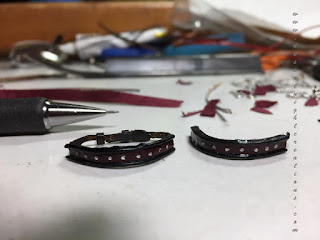 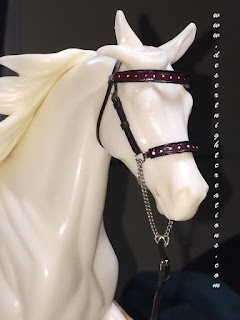 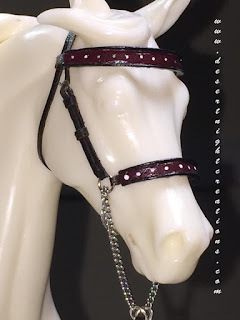 So around the end of may, early part of june, I started experimenting with making real holes for the browband and the noseband of saddleseat style bridles.  At first it didn't really work because I was still using needles to make the holes.. then DUH I figured out that I could use a mechanical pencil to punch the holes with my cutting mat underneath.  So the above halter has white behind the maroon piece and those are real holes punched in.  I did fill a couple with white paint to make them stand out more but all in all I really like the effect!

I am trying to push myself to get more studio time and blog time, so hopefully there will be more posts!

Real fast I'm going to list out the things I have going on currently:


Working to keep myself current in my career as being a "Older" working woman in the tech field- this means online learning as much as I possibly can.  Currently going through codeacademy.com to learn to script in python and wading through a Linux Essentials course.
Photography For our Mims - still have like 1,000 photos to go through from June
Miniatures - working on two halters.  Upping my game in the silver work and learned new knots.
Pool twice a week- going to vegas to play pool in a Tournament in August! 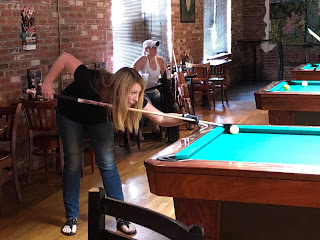 Excercising - doing 3.6 miles to 4.8 miles 4 days a week.  I've put on about 40lbs and now that I've literally chewed through whatever emotional thing I needed to, I want the weight gone and to feel better.

Know what that adds up to?
I'm tired. SO. Very. Tired.

I did the "low key" Breyerfest this year. Bought only 3 or 4 things for me. (Much more for the boy).  Didn't bring anything to sell because my entire collection is currently packed up because 1. flood and 2 3 New Kittens/Cats (Going forward referred to as "Cattens") and I didn't have the energy to unpack it all and sift through.  I didn't even bring my "big dog" camera.  Just hung out and did some stuff but I found my inspiration again and that was seriously priceless.

But i'm trying. I'm trying to find a new normal after the divorce and I haven't quite figured out who I am now.  Pretty sure most people go through this..  Don't even get me started on dating.. oy. just.. ugh.. lol

Anyway  Happy July! and here are some Pretty Photos From Our Mims 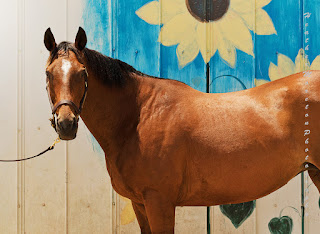 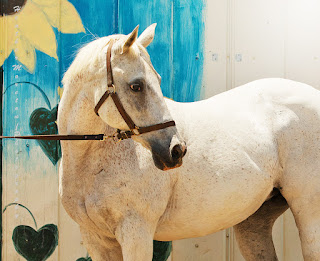 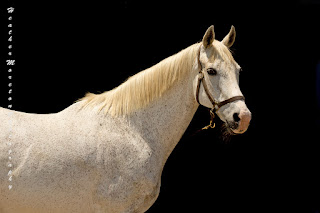 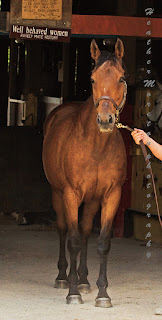 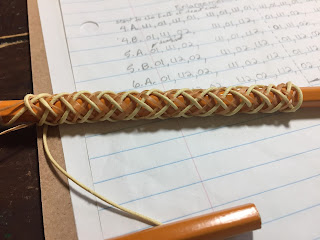 As always I started Breyerfest Week on monday with a Visit from Susan Bensema Young .  Susan has been my longtime Mentor/Sensai (as my Son so astutely called her).  Some years Sue and I just talk about work we're doing or others' work.  Some years she comes and I actually learn something.  This year I was able to attempt a Fan knot and a nosebutton Knot that I'll be using in the future for my bosals.  (In progress nose button knot above)

If that weren't enough, Sue showed me how to sharpen and properly use a hand held "graver" and "Silver ball".  I took short videos of each so that when I go to work on my silver practice I can see exactly how I should be working.

I am very inspired after this visit.. I'm looking forward to making a new bosal with the new nosebutton and fan knots that I learned.

The next two days, Tuesday and Wednesday I mostly cleaned up the house and just kind of relaxed.

Thursday was the day that RJ and I made it to the Clarion and met up with Jesse Tackett and Anna Tackett.  At the Artisian Hall that night, This happened:  (remind me to wear makeup when taking pictures.. lol) 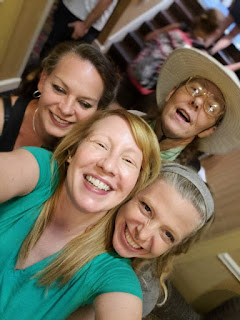 In the Middle of that Ball of Talent  in green is me (the least talented here!); Then Morgen on the Right and Jennifer Danza on the left. Sue is in the back with the hat.  We were having a great time and I'm so thrilled that we got this shot!!  Also we had the usual room sales and that's always fun to do because sometimes you see long lost friends wander in :)!

On Friday RJ and I had our first SR tent time.  While we were eating lunch waiting for our tent time, completely by Co-incidence, we met up with Candace Curtis as we were sitting under a tree!  She and I Talked about the horsepark changes and Breyerfest this year.  This year Breyer used a lot more of the park than in the past.  The SR tent and the line where one waited for their SR Tent time was much bigger- an actual tent store this year with more checkout stands. It all went very smoothly and quickly. Much Better than in the past ! 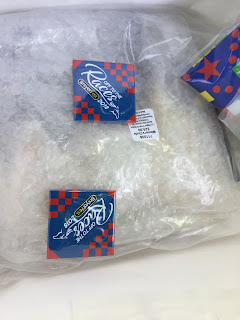 RJ has started to collect Breyer horses. Not as rabidly as I once did of course But I'm happy for any commonality with my kiddo.  So He was after the Red Smarty Jones and the checkered Newmarket.   The first number draw was in our favor and we were able to get both of the horses he wanted the first time through!  I told him it was a Breyerfest Miracle! lol


Saturday RJ wasn't feeling well so I ventured around the park by myself.  I didn't have as good luck as I did on Friday- I was further back in line. So No special surprise horse for me that day but I did manage to snag a Glossy Sierra Rose and a Glossy Straight Bet. (both are on ebay because I have no idea what OF's are worth anymore)

My Breyerfest Loot included Getting my painted Mulenette Resin from Jennifer Danza and my UPnova from morgen. I also managed to get a Takeshi Sticker, a Westpoint medallion, a Cary Nelson Halter and a Niki Button Akhal Teke bust! 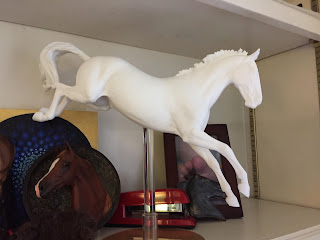 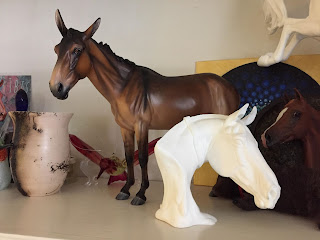 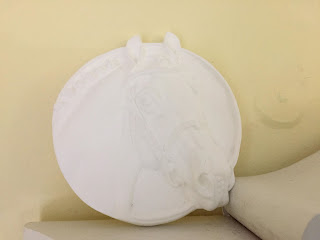 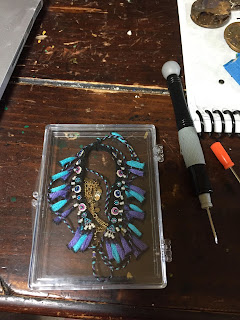 As always my life has been waaaayyy too busy for me to reasonably handle but I jut keep trying day by day. This vacation was REALLY great for relaxing and not stressing out too much.  I'm hoping that moving forward I'll start making more tack again.  I can't wait till nexdt year though!