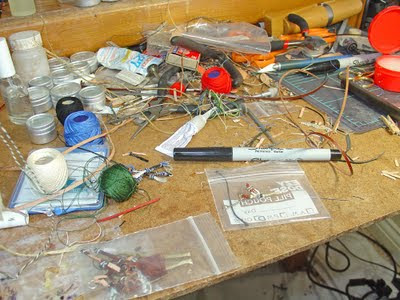 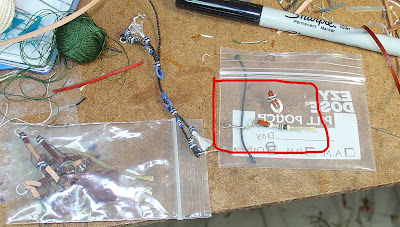 Above, enclosed in red is a bridle in progress to match my beloved Terry Newberry saddle. I was almost finished with the one side when I realized that it was too long. When I went to shorten it and it's mate, I couldn't find the mate. I looked EVEYWHERE for it! I JUST had it and was working on it most of the morning. (RJ took a mega-nap so I actually had some time!) I couldn't believe it. I tore through the stuff on my workbench and it's absolutely no where to be found. I suspect a cat "theifed" it somewhere but i have no clue where.. or it could've been stuck to my clothes.. or ended up anywhere I Guess.. It makes me really frustrated because now I have to make a new one and all of that time I spent on it earlier today was a waste.. SOOO FRUSTRATING!

This has happened to me before, when I lived in the "Highlands" of Louisville in an apartment. I had made one of my first english bridles with laced reins and it totally disappeared. My cat at the time, Max, was fond of playing with the bridles but she didn't eat them. I expected to find it when we eventually moved but it was SERIOUSLY lost. I NEVER found that thing. To this day - three moves later - I have no clue where it is..

The first picture above is what my immediate work bench looks like so you can probably see why I lost it
Posted by Heather M. at 1:57 PM