A few steps forward for once! 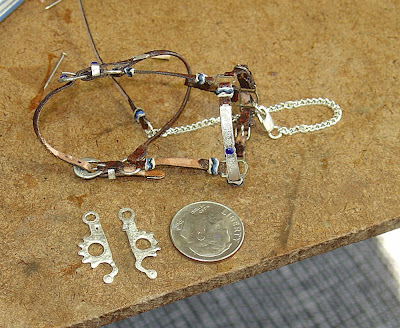 This weekend, i'm hoping to get some "Dremel" time and some "Engraving" time in so that I can finish up one project and start another.

As mentioned previously I'm working on a western show halter that is similar to the NAN donation western show halter. The difference however is that this halter has rio rondo buckles and the theme is blue. This halter has a blue and black double interweave on a turks head knot and blue swarovski crystals instead of the green that the NAN halter had. Everything is finished except for the side plates. My son won't sleep through a lot of dremeling and definitely can't sleep through engraving so I have to find a time that he's awake, my husband is willing to watch him and I'm awake enough to engrave. LOL!

The bit shanks are for the bridle that I planned around the end of last year. I had planned a braided black, blue and white themed braided bridle. This is just "More to the point" of how long it takes me to get to things.

I am unusually proud of these bit shanks because 1. I have actually domed them out a bit using a hammer and some dremel bits that are round balls on the end and 2. the shanks are very close to being identical. Above you can see that one is signifigantly bigger than the other. I've fixed that issue since I took the photos of these this morning. (RJ has slept a lot today so I've had to be very quiet and quietly dremel a bit here and there)

It's still a bit crude looking to my eye but I'm pleased none-the-less. I'll work on a connector bar here soon. I'm hoping to work on this bridle while we're on our trip..

I've had a few questions about how I work in silver. Seriously it's all been trial and error for me. It started when I decided to do real silver plates for my saddles back in like 2003 or 2004 and I've just worked on my skills ever since. I first approached silver as though it were like paper, having no other mental reference to draw from. It's nothing like paper.. and I know you're thinking "DUH" but seriously, I had no other approach. Then I realized that silver could be dremeled and formed using a dremel and I hopped gung ho into doing that. Now I've gotten a lot better using the dremel to patiently form and shape the metal and now I'm slowly moving forward into trying to make my bits a little more 3-d. Buckles are very intimidating to me right now because no buckle I've made actually turned out like I had initially invisioned. Rather they are compromises between what I want and what I was able to do. Thats another thing I really like about these bit shanks.. they are turning out as I had intended.

SO if you're on the fence about getting some silver sheet, go for some 30 gague argentium and start hacking away. Remember that there isn't a soul on the planet who's first attempt at something turned out spectacular. Allow yourself the learning curve and to fail. You'll find that giving yourself that kind of freedom will be the best thing you can do for your creativity. I've learned more through my mistakes than I can ever tell you..

We'll be going on a trip soon to Upstate NY, specifically Utica and Cooperstown, NY, to visit with my Husband's family. (His folks are from there but ended up in eastern TN for a time which is where my husband went to school (elementary through college) ). I've been to Utica's Famed Sarnac Brewery (LOVED IT!) where they have two real tiffany made lamps and to the Baseball Hall of Fame. Two places that I think my son is going to enjoy when he's a bit older.

Speaking of munchkin, he got tubes in his ears yesterday because of the constant ear problems that he's been having. Poor little guy, if it's not one thing it's another. I'm hoping that the tubes clear up a lot of his illnesses and he can get on with the business of being a little boy instead of being tired and sick all of the time! He also hasn't really been vocalizing real words like "momma" and "Daddy".. instead its like "momomom" and "Da! Da! Da!".. but he's been babbling more today so we are hopeful that the tubes will help his speech.

Happy July 4th Weekend! We'll be spending this weekend allowing RJ to recoperate and I'll be trying to get some more fireworks pictures. If/When I do, they'll be on my Photography Blog.

I still haven't gone through all of my egyptian event photos and I have photos of my amazing daylillies to show off too!