whirling, blur of a mess... 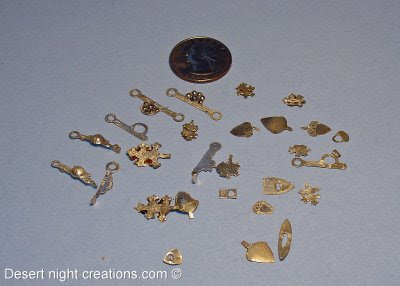 No, not my studio (well, yeah, my studio too) but my brain. This weekend I got jack NOTHING accomplished despite my best efforts. Saturday morning, at 4am munchkin's diaper leaked so the poor thing started to cry and woke us. It was my turn to get up with him (I let hubby sleep late on Saturdays since he gets up with munchkin throughout the week) so I jolted awake and bounded up the stairs as fast as I could to see what was going on..

Because of this, I ingested LARGE amounts of caffeine to wake up which sent my brain into overdrive. I was able to get some time in the studio but I couldn't focus for anything because my brain was whirring too fast.

Yesterday was spent going to my parents with munchkin and going out to eat so (Marimbas in Shelbyville!!!!!) I didn't have a lot of productive time in the studio.

I need to engrave some keepers for a woven knot western show halter but I can only work in the studio when munchkin sleeps. My engraver is UBER noisy so I can only engrave when my husband is home, and feeling generous about giving me time to engrave. We have a basement but it is currently unfinished, although I guess I could go down there to engrave and munchkin wouldn't wake up..hmmmmm........... That's a thought.. I could eye the treadmill and guilt myself into getting on it too..hahaha

Yesterday during my brief time while munchkin slept I looked on youtube to see if anyone had put up some silversmithing videos. I was richly rewarded and I now have some more ideas about how to make my tiny silver bits more 3-d. I know that I could just sculpt the buggars and then cast them, but casting costs more money than just hacking them out of silver one at a time. Hopefully, eventually, I will make the bits more uniform and maybe I will be able to cast them. Right now the "process" is very hit or miss so I'll just keep them to myself.

Above is the "silver graveyard" - a collection of stuff that has been pulled off of finished pieces or never passed the muster to be used on pieces I was working on. I am still very proud of the tiny silver oak leaves. They taught me a lot about how silver works, or doesn't :-)

I have a harder gauge of silver on it's way from Rio Grande (not rio rondo). Heather Downing mentioned when I saw her at Breyerfest that she felt that my bits were bit flimsy. Although I disagree with that to some extent, (because you don't need a lot of weight to control a model horse <G>I decided to test the waters with some 28 gauge silver to see if I liked working on that better. I think it may hold more detail than the thinner gauges.

We shall see, and I promise to whine about it on my blog! YIPPEEE!