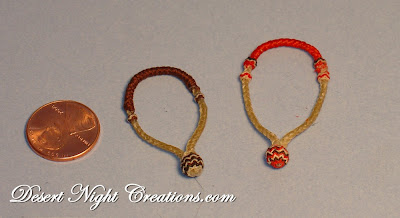 Above are my latest attempts at bosals. The one on the left actually has a triple color interweave of white, brown and dk green. Unfortunately, in the picture or in person, you can't see the green now that it has been coated. Point driven home from Sue about how the colors have to be highly contrasting in order to see them
The red one is similar to the donation that I'll be sending Heather Jackson Lain for her
Model Horse Anonymous model horse show. Heather is a vet tech in TN and we've spent hours at model horse shows talking about critters - mostly kitties. So it's my pleasure to donate to her show because the proceeds go to the Throroughbred Charities.. With any luck, I'll find a job this year and I'll be able to travel to the show myself.
Hubby and I have decided that the basement studio is a no go right now because of it's unfinished state. So no kiln for clay or PMC Clay right now. Maybe in the next house.. I'll still need to eek out my bits using dremel and silver. Hubby has promised that I can have some "Noisy" time on the weekends while munchkin is awake.
I posted the below to my yahoo group this morning. I haven't gotten any response to it which is disappointing so if you are reading this, and would like to comment on it, please do. I really would like to know if there is still interest custom work from me.
Posted earlier today on my
Yahoo Group:
Since I'm sure that you guys are probably being bombarded on your Yahoo Group lists with well wishes for the new year from several Folks, I'll keep this rather brief!
Firstly, thank you to everyone that entered the lottery for the last western show halter and for still being on this list and supporting me. It really does mean a lot to me!
Secondly, I'm considering doing a once a month lottery, or once every two months for made to order Halters (any kind of halter, not just western ones). This year I HAVE To find some kind of job so I am not totally sure how my time is going to work out which is why, if I do the custom halter lotteries, that I am going to limit it to something small like this.
The other alternative is to do what Susan B-Y does, which is hold a lottery every couple of years for custom tack orders with a turn around time of a year from when the order is started. I would like some feedback about this as it is a decision that I don't take lightly.
Third, and this is big news for me, I've learned to interweave a second color into my knots. This opens up an amazing amount of possibilities for braided and western tack and I'm really excited about it!
I will be sending Heather Jackson-Lain a donation of a Bosal Bridle for her Model Horse Anonymous show. (held in TN)
I will be doing something for the NAN 2009 auction.So stay tuned and I hope everyone has a wonderful new year!!
Heather Abounader
Museum Quality Miniatures
http://www.desertnightcreations.com/
http://desertnightcreations.blogspot.com/
Posted by Heather M. at 3:13 PM