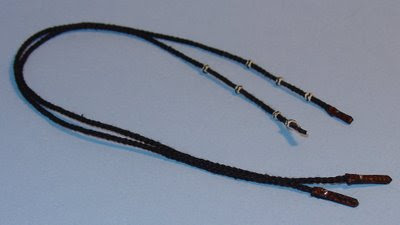 The reins above will be for sale when they're finished. I've seen some reins for sale here recently (and yes, Susan's reins helped with the idea) and that gave me the idea to salvage these and sell them. They were on a bridle that I never used so I took the bridle apart to salvage hardware etc. I saw these reins and thought, "Well, if I spiffed them up, someone might want to buy them". I have no idea what to charge for them so they'll probably be relatively cheap. (and I mean less than $25) Please let me know if you think this is a good idea or if I'm "reaching".. HA!

Also, I hear from Heather Jackson Lain that the red bosal will be auctioned off and the proceeds will go towards her show which benefits the Throroughbred Charities.
Posted by Heather M. at 4:40 PM