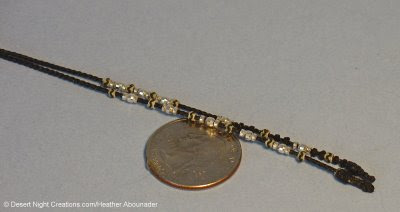 Above are photos of the Romel Reins that I am working on. I had made a lot of spanish ring knots but they were only one pass. It made the reins look kind of ratty. So now I'm starting over on them and doing a spanish ring knot of two passes instead. I'm also making one less knot inbetween the silver and the turks head knot. I was making 3 but I decided that 2 looks neater on those busy reins. I have to make the knots during the day, with the double magnification lens on my visor because they're black and I can't see them otherwise

My knots are still not as neat and even as Sue Young's knots. I really need to learn how to make them a bit more even. I guess that will all come with time and experience.